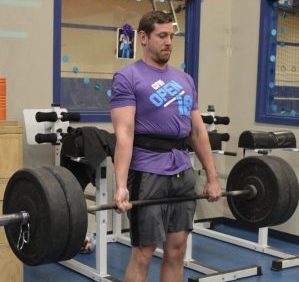 Brad is a Level 1 CrossFit Trainer. Brad advocates for establishing both short term and long term goals for mental, physical and professional improvement. He believes that these goals can be met and challenges can be conquered by diligent planning, consistent practice, and communication with community (coaches, colleagues, friends and mentors).

Brad grew up trying all different types of sports from the traditional (football, baseball, volleyball, golf, and swimming) to the less traditional (hunting, fishing, trap shooting, and archery). He even continued his love of football into college.

After college, Brad shifted his passion for competing in athletics towards academics. However, after graduating from law school in 2011, Brad found himself out of shape and looking for athletic competition again. Brad began distance running, but found that even after running several marathons, he still felt out of shape. Then he found CrossFit in 2015.

Brad fell in love with the community at CrossFit Valley Forge and quickly went from attending classes 3 day per week in his first month to attending 5 or 6 classes per week ever since. After his first year, he had rekindled his passion for sport and wanted to help others achieve the same. He received his CF-L1 in 2018.

Brad loves coaching and talking with others about fitness. He not only hopes to continue to grow into a great coach, but also hopes to become a better athlete/competitor alongside the others coaches and his friends at CrossFit Valley Forge.